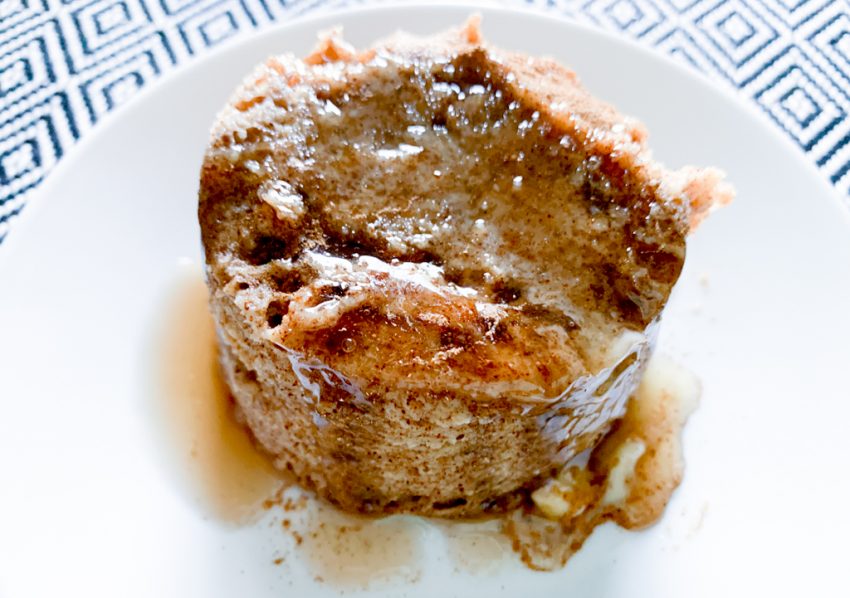 Disclaimer: This content contains affiliate links. As an Amazon Associate, I earn from qualifying purchases. For more information, please see my disclosure.

Inside: A super simple recipe for delicious Keto French Toast. This grain-free, paleo “mug muffin” has all the classic flavors of French toast without any of the grains or sugar and takes only 90 seconds to whip up!

The other morning, as I was mindlessly scrolling through social media, a friend posted a photo of her giant stack of french toast, dripping with butter and syrup. And I have to be honest, I wanted it. What can I say, I’m human. My brain knows that eating a stack of conventional bread dipped in cream and eggs, fried in butter, and topped with a generous drizzle of syrup would inevitably lead to an explosion of joint pain, likely stomach upset, and mountains of regret.

But my heart? IT. WANTED. FRENCH. TOAST!

I briefly considered my options. Anyone who says you can’t recreate fabulous meals to be compliant with the Plant Paradox diet just hasn’t spent enough time playing in the kitchen. And I knew that I could bake some keto bread. Wait for it to cool. Whip up a custard of pastured eggs, heavy cream, and spices. But really, on a lazy weekend morning, it sounded like to much work.

I’m the master of no-fuss meals. I love dishes that start with a frozen bag of vegetables, which I coat in a bit of oil and spices and roast until done. So out of sheer laziness, I came up with this 90-second keto French toast. My keto French toast is grain-free, compliant with Phase 2 of the Plant Paradox diet and makes a GREAT lectin free breakfast!

I’ve long been a fan of Paleo “mug muffins.” A little fat, a bit of almond or other grain-free flour, and an egg mixed together and microwaved for 90 seconds creates something that tastes magically close to bread. With the eggy batter, I wondered if I could recreate the classic flavors of French toast, but in a lower carb form.

I loved how this recipe came out. I tried a few different versions until I got it exactly right. Eating French toast daily is a sacrifice, friends, but it’s a sacrifice I’m willing to make for you. 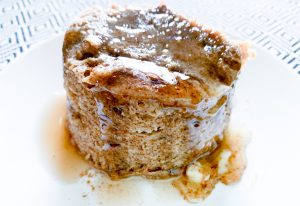 I used olive oil in the recipe because it’s my favorite cooking fat of choice (and Dr. Gundry asks you to include it in your daily diet) but you can also create this Paleo mug muffin with melted coconut oil or melted butter. I sometimes dislike the taste of olive oil in sweet dishes, but honestly with the other flavors from cinnamon and vanilla, I couldn’t taste the olive oil flavor at all!

For the sweetener, I used the “brown sugar” version of Lakanto Monk Fruit Golden sweetener – which is a mix of monk fruit and erythritol. I’m pretty picky when it comes to the most sugar substitutes, and this is one of my favorites. It doesn’t have an odd aftertaste, and the “golden” version tastes like brown sugar and complements the keto French toast very well.

I use a mix of almond flour and coconut flour in my keto French toast. To keep it nut free, you can substitute tiger nut flour, which despite it’s name, is nut free.

I’ve tried this recipe both with vanilla extract and without. It’s good either way, so I’ve left the extract as an optional ingredient, but I do think it makes it a bit more decadent with it.

And finally, I love this Paleo mug muffin plain, but drizzling on a bit of keto-friendly syrup and a dab of butter totally elevates it. 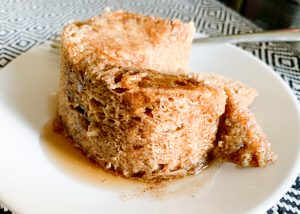 If you’re looking for some good syrup options, my favorites are ChocZero Maple syrup or the Lakanto Maple flavored syrup. I’ve also heard that a great option is the All-U-Lose maple syrup, but I have not sampled it personally. If you do – let me know what you think!

I used a nutrition app to calculate the carbs in this, and this keto French toast has 5 net carbs as written. If you are tracking carbs, make sure you to factor in any carbs in the maple syrup should you choose to use it. 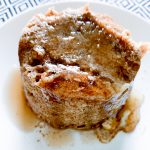 A simple Paleo mug muffin with all the flavors of French toast! This recipe is grain and sugar free. 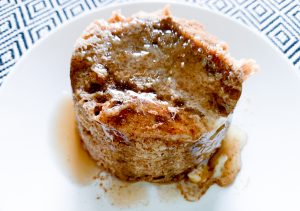 I hope you enjoy this simple, 90-second keto French toast! It’s one of my favorite lectin free breakfasts. 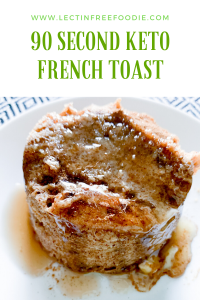